The list of T20Is between South Africa and India is fairly short-only 14 matches of which one was abandoned.

There have been only two bilateral T20I series between these teams. The first was in India and was won by the visitors 2-0 with one match abandoned. The second was in SA and was won by India 2-1.

The table above shows India’s first ever T20I in 2006 which was won by them. They played their next T20Is in the World Championships in Sep-Oct 2007. It may well be a record in any sport (not just cricket) where a national team won a major tournament having played only one match in that format earlier.

Here is a summary of the results:

Interestingly India have never won against SA at home, though they have done better in SA and elsewhere.

We now look at individual performances. With the limited sample size it is not worthwhile to find averages, strike rates and the like.

Rohit Sharma, who captained India in the last series, has the most runs. He and Raina are the only ones to have scored centuries in matches between these countries. Duminy has the best total for SA.

During the last series, first Dhawan and then Pandey recorded the highest scores for Ind in SA. CA Ingram’s score in an one-off match in 2012 remains the best for SA.

Bowling (4 wickets and over): 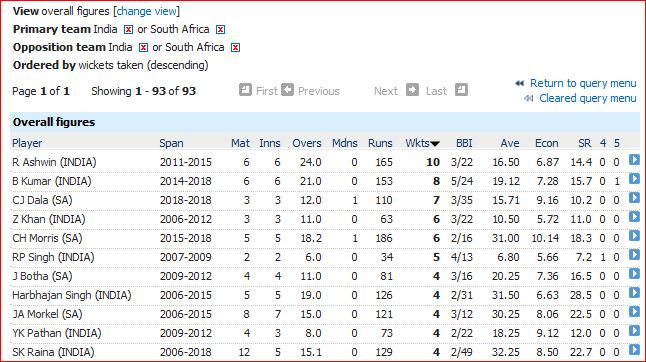 Newcomer CJ Dala moved up quickly during this series. The only 5-for is by B Kumar in this series.

Innings bowling (3wi and over):

The most dismissals are 9 by non-keepers RG Sharma and Raina. The most by a keeper is 5 by Dhoni.

Fielding: 2 and more dismissals in an innings: 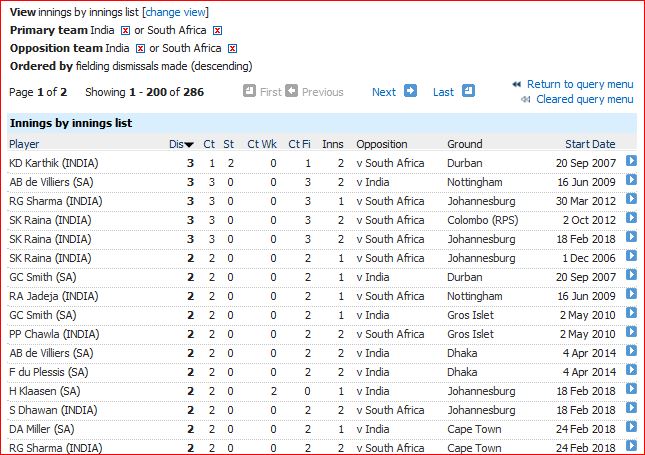 Strangely Dhoni does not appear here, and Karthik has the most stumpings. During that match Karthik also took a catch as a fielder.

All-round performances (20+ runs and 2+ wickets in a match):

Only one such instance, and it is not Kallis as you might think.