We look at other performances by captains in tests lost by their team. We will see that India is well represented here.

Best innings bowling (including all instances of 5wi and above):

Best match bowling (8wm and above): 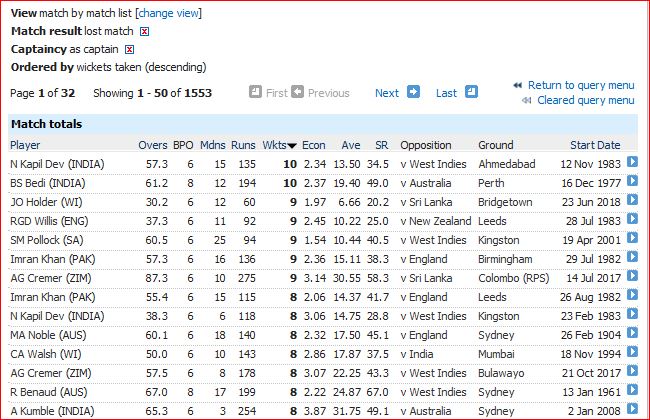 Kapil again heads this, from that same match in 1983. Bedi is the only other one with a 10-for. Current players include Jason Holder and Graeme Cremer.

Includes a few current players such as Mushfiqur, SPD Smith and Sarfraz. Sammy and Smith are the only non-keepers here.

Current player Sarfraz Ahmed tops this list along with AC Gilchrist, while MS Dhoni and SPD Smith also appear. SP Fleming and SPD Smith (twice) are the only non-keepers. Gilchrist was a “regular” stand-in captain.

Holder and Shakib from the present, while Imran Khan has two appearances from the same series in 1982. The best performances would by by Imran (July 1982) and Holder.