Now for individual bowling performances in Tests in the calendar year 2019.

The two top positions are for Australian players Cummins and Lyon. Cummings has a large lead. The best of the newcomers appear to be Rashid Khan, Embuldeniya and SS Afridi, while Cornwall had a 10-wicket haul in his 2nd Test

Best innings performances (including all 6wi and above):

Chase’s 8-wicket haul was largely responsible for England’s defeat. Next is another WI spinner who was playing in his 2nd Test. Other good performances were by newcomers JC Archer, TJ Murtagh and Rashid Khan.

Murtagh was the first Irish player to get his name on the Lord’s honours boards.

Here we add the only hat-trick this year:

Best match bowling (including all cases of 8wm and above):

Rashid Khan scored a fifty along with his 11 wickets. Other newcomers here are Cornwall and Archer. 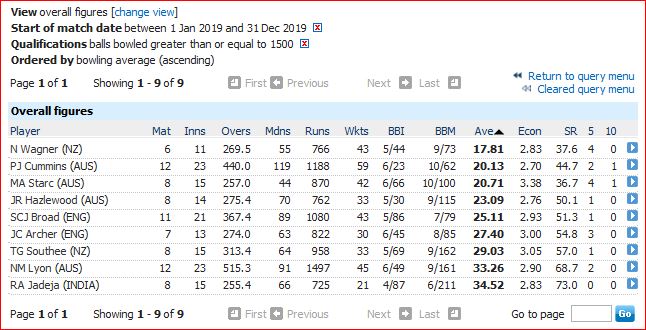